The federal government’s $30-million patent collective, announced last week, plans to help cleantech companies create and protect intellectual property. Ottawa chose Innovation Asset Collective (IAC), a five-month-old non-profit, for the pilot project, which will also give firms access to a collection of patents they can use to avoid lawsuits.

“In the global context, I really see it as a global arms race for innovation assets, so IP and data,” said Jim Hinton, an IAC co-founder and a lawyer based in Kitchener, Ont. “China is rapidly grabbing IP; the Americans have been doing it for decades.” The patent collective will help Canada compete with those countries and others in generating IP and helping the cleantech sector scale, he said.

In their first interviews since the announcement, Hinton and IAC adviser Richard Gold discussed what the organization hopes to do for its members and why it’s focusing on data-driven cleantech. But some innovation and IP experts are concerned that the collective has too broad a focus, and question whether the four-year pilot has enough time and resources to show it can work for Canada.

The collective’s first offerings will include “IP education, working with places like CIGI, where we have a lot of tools and experience,” he said, referring to the Centre for International Governance Innovation (CIGI), the Waterloo-based think tank where he is a fellow, and which has published 14 papers on IP in the last two years.

In addition to education programming, IAC will help companies “have access to a [patent] pool for defensive purposes, and also licences collectively to certain foundational patents,” said Hinton. Companies will be able to use the shared patents to countersue competitors that go after them for alleged IP infringement. “It’s really more of a deterrent than anything,” he said.

Innovation Asset Collective will receive $30 million from the federal government to educate data-driven cleantech companies on how to create and protect their IP, as well as give them access to key patents to avoid lawsuits. But some innovation and IP experts are concerned the non-profit is taking on too large a sector, and question whether the pilot project will be able to show results in four years.

IAC “doesn’t plan to be itself involved in litigation or countersuits,” Hinton said, noting that legal battles are costly and uncertain, and not a good use of the collective’s resources. “The measures that we hope to build will primarily help companies avoid litigation altogether by building a robust IP position.”

Both Hinton and Gold said IAC will not follow the model of some sovereign patent funds, which use their IP offensively by generating revenue through lawsuits and licensing. “We’re not trying to make money by suing people,” said Gold, who is also a professor at McGill University’s Faculty of Law and a member of its Centre for Intellectual Property Policy; he plans to work on IAC’s education initiatives. “It’s really a defensive mechanism to ensure that the Canadian firms don’t get beaten up too early.”

For example, France Brevets, a state-owned patent fund, sued smartphone manufacturers LG and HTC in the U.S. and Germany in 2013, alleging they had infringed hardware patents it controls. It reached licensing agreements with the firms in 2014 and 2016, respectively.

The IAC funding is part of the federal government’s $85.3-million IP strategy detailed in the 2018 budget. The patent collective will launch “in the coming months,” according to Hinton. IAC hasn’t decided whether members will pay fees to join, but companies won’t be obliged to contribute their own IP to the collective’s pool. Hinton said the organization plans to work with early-stage companies and scale-ups.

Hinton said IAC hasn’t determined which specific patents the collective will try to buy or license, and will make its decisions based on members’ requirements. One potential source is ExploreIP, a federally run marketplace where companies can find government and academic patents to license, which Bains also launched on Thursday. “There could be valuable assets in there to unlock and that can be providing value,” said Hinton, later adding that “some of the universities are really keen to feed into [the patent collective].”

IAC picked cleantech because it’s an area of existing Canadian strength, according to Hinton. “In the resource industry, we have a lot of clean technologies that are coming out,” he said. “They’re data-driven companies that are running into these global IP issues from day one.” He cited Vancouver-based MineSense, which makes sensors and software to measure ore quality in metal mines, and Calgary-headquartered Hifi Engineering, an oil well- and pipeline-monitoring platform.

However, Hinton said the sector’s IP performance is “nowhere near where it should be.” He cited a 2017 report from the Canadian Intellectual Property Office (CIPO), which found that while the country’s researchers working on climate change mitigation technology ranked sixth out of 11 large economies in a measure of patent activity, its businesses placed last.

The patent collective is designed to help change that. “The key thing for IP is you’re protecting an investment,” he said. “Canada is putting a lot of investment into clean technology.”

Ottawa has budgeted billions of dollars for the sector, including almost $1.4 billion for investments and loans through the Business Development Bank of Canada and Export Development Canada, as well as $400 million for Sustainable Development Technology Canada’s (SDTC) SD Tech Fund, which provides grants for companies commercializing new products. SDTC CEO Leah Lawrence is advising IAC.

Charles Plant, a senior research fellow at the University of Toronto Impact Centre who studies IP commercialization in Canada, expressed skepticism about the patent collective, with which he is not affiliated. He noted the cleantech sector includes companies developing a wide range of different technologies. “I can’t conceive of how a useful patent collective could evolve on such a broad basis,” said Plant, noting that firms working on, say, energy creation, energy storage, water remediation and carbon-dioxide capture all have different IP requirements.

Plant also questioned whether the pool will allow collective members to avoid IP lawsuits, since competitors could still sue to try and invalidate a patent, for example, by claiming their invention was already known before the patent was granted. Access to IP in the pool could help collective members win those cases. “But you’re going to have to spend time and money defending,” said Plant.

The licensing pool won’t be enough to help members scale, according to Plant. “Eventually, the firm is going to have to have its own patents, if it wants to attract venture capital and wants to become a world-class company,” said Plant. The collective does have plans to help companies generate more IP through education.

Jean-Nicolas Delage, co-leader of the technology, media and telecommunications practice at Fasken, said he welcomes IAC’s education initiatives. But he said the results of the patent pool will be harder to measure. “It’s going to be interesting to see if there’s enough time and enough capital to draw significant conclusions from the initiative at the end of the process,” he said. France Brevets, for example, was set up with €100 million ($149 million) in 2011, and received another round of the same size in 2016.

IAC does not plan to obtain corporate sponsorship to add to its government funding. It wants to “have the members drive the discussion,” Hinton said.

The non-profit’s other co-founders are Peter Cowan, the principal consultant at Northworks IP, an IP consulting firm, and Chris Wormald, who helped build BlackBerry (formerly Research in Motion)’s patent portfolio during his decade-plus with the Waterloo-headquartered company. Hinton and Cowan originally called for a patent collective when the federal government first announced plans for an IP strategy in the 2017 budget.

The federal IP strategy also includes changes to the Patent Act designed to make it harder for patent trolls to sue firms, and a specialized team within the government to help businesses develop their own IP plans. Dani Keenan, Bains’s press secretary, said the government will shortly begin negotiations with IAC on a contribution agreement for the patent collective, which will include when the funding will be paid out, and what targets the organization will have to achieve to receive it. 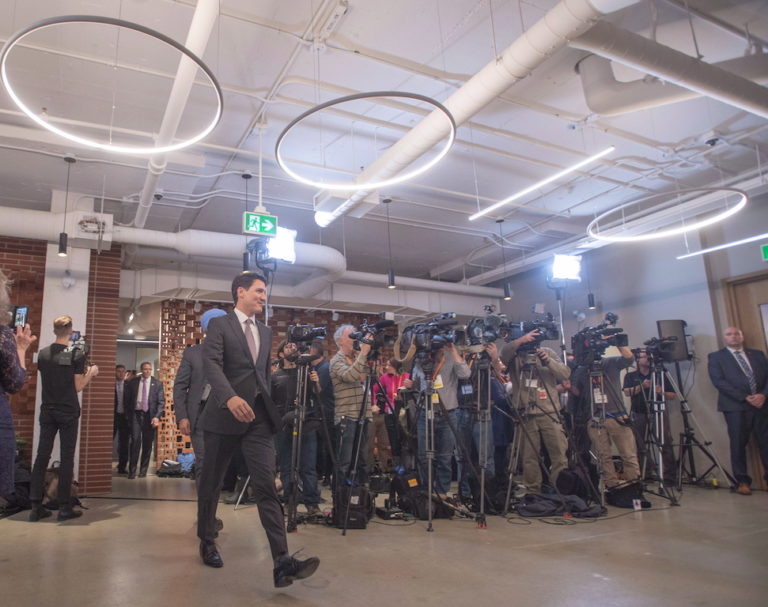